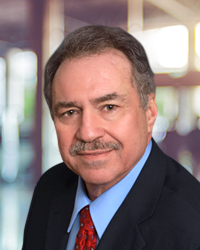 I am a principal in the law firm of Graves & Allen, with a practice that since 1973 has emphasized negotiation, structuring and documentation of real estate, loan and other business transactions, receiverships, civil litigation and bankruptcy.

I have extensive litigation experience and have enjoyed a Martindale-Hubbell AV Rating for many years. I also do extensive work as a neutral, providing services as an arbitrator and as a mediator.

I have been very active in the American Bar Association, and in particular, its General Practice Division. I have served terms as: Vice Chair and Chair of its Real Property Practice Committee; Chair of the Subcommittee on the Use of Computers in Real Estate Transactions; Vice Chair, Bankruptcy Committee; Advocacy Coordinator; Advocacy Committee Chair and Vice Chair; Program Board Member; Marketing Board Member; Senior Vice Chairman of the GP Link Committee, Deputy Chair of the Litigation Committee, Chairman of the Technology Committee, Chairman of the Leadership Training Committee, member of the Long Range Planning and of the Corporate Sponsors Committees and a Member of the Section Council. I currently serve as Editor-in-Chief of GPSolo Magazine and of the GPSolo eReport.

I was the ABA Advisor the ULC (formerly NCCUSL) drafting committee for eDiscovery Rules and currently serve as the GP Solo Division Advisor to the ULC Drafting Committee for a Model Real Estate Receivership Act.

Alameda County Bar Association Panel of Mediators; member, American Bar Association Alternative Dispute Resolution Section (Mediation Committee) member, Association for Conflict Resolution (Board of Leaders, Commercial Section). I have actively served as a mediator for over 14 years. I also regularly present at programs on mediation and work as an instructor in training programs for mediators. I have mediated numerous cases in various areas of practice including: business disputes, real property matters, construction disputes, contract matters and personal injury cases. I enjoy a very high settlement rate in mediation matters.

I have accepted appointments by courts throughout Northern California as a state court receiver. As a result, I have had the responsibility of operating properties and businesses of extremely varied natures and collectively valued at in excess of $100,000,000. I have also served as a Bankruptcy Trustee for the United States Bankruptcy Court, Northern District of California.

In addition to operating my own law firm, I have served as an officer, director and/or manager of businesses engaged in providing legal services, real estate related services, consulting, computer services and retail sales. As a state courtappointed receiver, I have assumed responsibility for the operation of many businesses including apartment complexes, office buildings, stores, a public cold storage warehouse, a golf course and nursing homes. As an attorney, I have represented and served as a consultant to numerous and varied businesses. I have also served as the chief executive officer of large not-for-profit organizations, including Family Services of the East Bay and the California Youth Soccer Association.

I have actively worked with computers since 1980. After developing an interest in computers as a hobbyist, I began to use computers in my professional and business life in the early 1980s. I ultimately become a principal in two closely held computer companies involved in software development, sales and consulting work. My activities in the industry also include: (1) the design of a litigation management system for attorneys; (2) work as a beta-tester for various hardware and software concerns; (3) authoring and publication of numerous articles respecting computerization and the practice of law; and (4) frequent lecturer on computerization and the practice of law.

The December 1983 issue of Personal Computing included an article on innovative uses of personal computers that focused on my use of computers in the practice of law. I have worked with various manufacturers and publishers respecting the development of programs for the legal community.

Listed in numerous Who’s Who publications.

I was employed throughout my law school career, working between 20 and 35 hours a week as a law clerk, a faculty research assistant, a Program Director for the Oakland Lawyers Committee and as a Teaching Assistant in the Political Science Department of the University of California, Berkeley.

My personal life has focused around my family. I participated with my children in a number of activities including Y Indian Guides, Y Indian Princesses, Cub Scouts and soccer. For a number of years, I have coached youth soccer teams; I have California Youth Soccer Association certification as a youth soccer coach (“F”, “E”, and State “D” level certificates, National “D”, National “C” and National Youth coaching licenses, and National Soccer Coaches Association of America Regional Academy Diploma). My teams have competed successfully in the United States and in Europe.